The Summer of the Quarantine Garden

If you were to ask one of my college roommates about my love of plants, she would tell you that I was obsessed. Visitors to our apartment were constantly welcomed by houseplants whenever they’d walk into my bedroom, and my roommate couldn’t believe it when I’d bring home yet another succulent. My other roommate was an enabler, buying me a DIY succulent book and a set of mini gardening tools for my birthday. Needless to say, I love plants.

But, despite my abundant collection of houseplants, an outdoor garden was never something I had tried before. I’ve grown a few flowers and herbs here and there, but never a full garden. But when the pandemic struck and the lockdown started, I — along with the whole world, it seems — decided to start a vegetable garden.

Don’t get me wrong, though — this was not me jumping on a worldwide bandwagon! Quarantine was just a push towards something I had wanted to do for a long time; have my own summertime garden. So as the weather got warmer, I began planning my backyard container garden. (While I have a large enough yard for an in-ground garden, the yard is surrounded by black walnut trees, which emit toxins from their roots that can kill other plants, such as vegetables.)

Excited for fresh veggies, I chose to grow the following in my garden:

And some lavender and other flowers for color. Our backyard garden also has some perennials already, which I placed the tomato pots between.

In May, I ordered organic soil/fertilizer and containers from Gardener’s Supply Company, as well as some containers from Home Depot. Due to the pandemic, shipping took longer than usual, so my garden had a late start. While the majority of the garden was grown from seed, the tomatoes and peppers were bought as seedlings from a local nursery. I bought two grow bags and self-watering pots for the tomatoes, but ended up with more than two plants, so while one cherry tomato plant and one “big boy” plant were planted in their own self-watering pots, the rest of the tomatoes were planted in regular pots. While all the plants produced fruit, the ones in the self-watering pots grew the largest and produced the most.

The beans, lavender, cucumbers and orange peppers were each planted in their own barrel pots, with trellises placed for the beans and cucumbers. I planted the lettuce and spinach in a raised platform bed, as well as two green pepper plants. Watching the beans grow was especially exciting, as they were placed next to our deck which has a canopy. Once the bean stalks reached the top of the trellis, they continued over the deck railing and up the canopy leg. It was pretty amazing to see them claim our man-made structure and continue growing!

As the garden started to grow and come together, I felt immensely proud at how it was turning out. For my first garden, I hadn’t expected it to grow so fully, but I suppose the research and preparation I spent beforehand paid off. That’s not to say there weren’t a few lessons I learned, however; there were a few things here and there that I made note of and will factor into my garden planning for next year.

For one, the spinach was not heat-resistant. While some varieties can handle the heat, my spinach bolted after a few weeks of producing great leaves. Eventually I had to dig up the seed stalks and plant more lettuce. I plan to buy a heat-resistant variety next year. But, the spinach was delicious while it lasted! I also had some trouble with the cucumbers; while the plant produced a lot of fruit, only a few cucumbers ripened correctly. This was perhaps due to the weather we had, and I plan to read up more on how to grow cucumbers for next year.

Perhaps the biggest problem I ran into was my peppers. In the end, I was only able to harvest about four peppers (two green and two orange, though the orange were not fully ripe and were still green when I picked them) because the rest were completely devoured by bugs. I’d like to try growing peppers again next year, but be fully prepared to protect them from caterpillars. If you’ve ever grown peppers and had to protect them from pests, I’d love to hear your advice on how to do it, so leave a comment!

Despite these few hiccups, the rest of my garden came along beautifully. I had a healthy bounty of lettuce, spinach, tomatoes and beans throughout July and now into August. I’m already planning my future gardens, and I’m taking the lessons I learned this year and applying them in my plans for next year. I’m already excited for the next summertime garden!

Did you grow a quarantine garden this summer? I’d love to hear your stories — comment below with tales of your harvest! 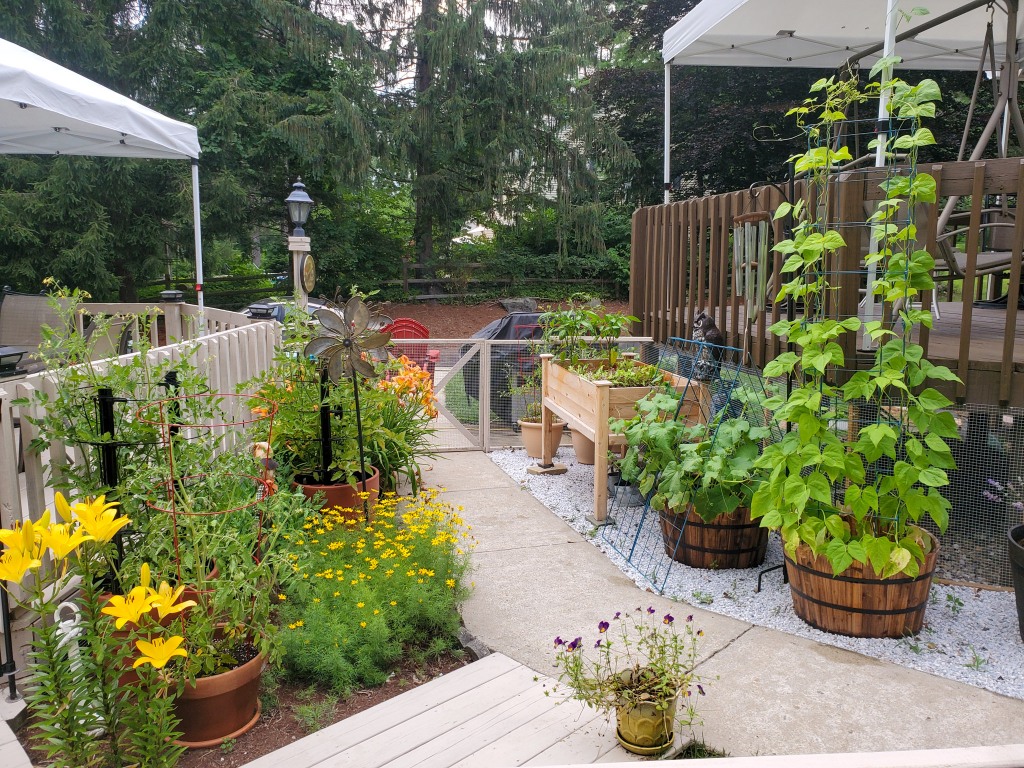 This article originally appeared on the Wix site.